I was at a nerd party last Friday and as it goes, ideas became wilder as the beer supply diminished. One of the wilder ones stuck with me: Jarl brought up the possibility of a submarine cable across the Arctic region, properly connecting East-Asia and Europe.

This is certainly a wild idea, but as a matter of fact it may have a great potential. The current routes between Europe and – say – China or Japan are flat out lousy. Ping times to Japan range between 300 and 400ms and to China close to half a second (brief and unscientific tests gave me average ping times of 320 and 420ms respectively). And for a good reason – the traffic has two equally lousy routes to choose from:

Either of these two routes is at least 16 thousand kilometers and probably closer to 20 thousand, with a lot of peering points along the way. (See Wikipedia map of submarine cables for reference)

Iceland is finally becoming pretty well connected as we will soon have at least 3 major submarine cables, each with bandwidth in the 1 Tbit/s range, and directly linked with the main peering points in Europe, namely London and Amsterdam (the latter one is unconfirmed).

From here, the distance through the Arctic region to Japan is less than 10 thousand kilometers as drawn below: From Iceland, north of Greenland and then straight across the North Pole to enter the Pacific Ocean via the Bering Strait and on to Japan. It is probably possible to lay a cable this route using submarines. It has been done, but I bet maintenance is a bit tricky. Somehow I just don’t see a submarine taking in a cable to splice damaged fiber.

A more likely route would therefore be the fabled North-West passage that presumably is now open for cable ships just as well as other vessels, allowing for relatively normal maintenance on a cable lying there. This variation is a little further in total (counting from mainland Europe). Both routes should nevertheless be able to bring ping times from Europe to East-Asia down to the 100ms range (laws of physics, like the speed of light start to kick in at these distances).

This is not perfect, but importantly this is below the threshold acceptable for VoIP traffic, meaning that bandwidth on this route should be hot property. So maybe, Iceland will one day become a major peering point for IP traffic to Asia…

Certainly a big, crazy, wild idea – but worth further investigation. 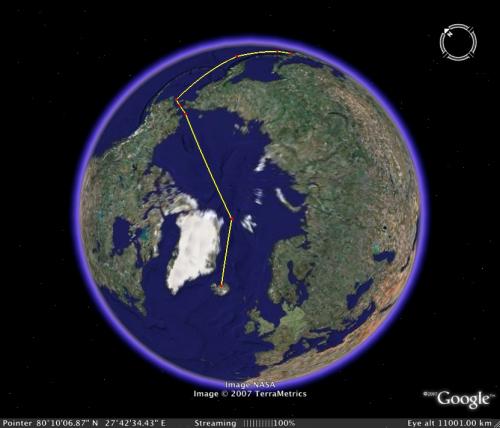